Asian carp have devastated iconic fisheries throughout the country and now threaten the Great Lakes and their connected inland lakes and rivers, too. Asian carp are not just a Great Lakes problem, or a Mississippi River problem, or a Kentucky Lake problem. They’re an American problem, and it will take a united national effort to stop them.

Asian carp are an invasive species which have disrupted fisheries throughout the South and Midwest and now threaten the Great Lakes. Asian carp include bighead, silver, black and grass carp. Bighead and silver carp have damaged fisheries from Kentucky Lake to the Illinois River by hoarding food resources and outcompeting native sport fish. In addition, Black carp threaten endangered mussels from Louisiana all the way up to Illinois and the Ohio River. And finally, Grass carp threaten waterfowl habitat and are reproducing in Lake Erie and its tributaries.

Now more than ever, we need to stop Asian carp from invading our waters in the Great Lakes and reduce their populations wherever they’re found in our country. We have a rare opportunity to stop bighead and silver carp from getting into the Great Lakes where they would threaten the $7 billion sport-fishing industry, the fisheries and way of life for over 40 million people. The U.S. Army Corps of Engineers has a plan to reinforce the Brandon Road Lock and Dam near Joliet, Illinois, which would implement multiple technologies to keep Asian carp from advancing closer to Lake Michigan, as a silver carp was able to do in 2017. The U.S. Army Corps of Engineers approved the final plan in May 2019 and sent it to Congress, where we need swift approval and funding.

Additionally, we need to maintain and increase funding for solutions to reduce Asian carp populations where they already exist and halt their advance upstream, such as those provided through the Great Lakes Restoration Initiative.

The future of our fisheries depends on it.

The Army Corps of Engineers plan to stop Asian carp from entering the Great Lakes identified pathways Asian carp could take to the Great Lakes and ways to close them. These include structural measures such as the proposed Brandon Road Lock and Dam plan to install an engineered channel equipped with multiple fish deterrent technologies including a bubble barrier, acoustic “sound cannons,” an electric barrier and a flushing lock.

The final chief’s report was approved and sent to Congress in May 2019. Public support – particularly from anglers affected by or at risk from an Asian carp invasion – will be critical to getting the plan approved and funded by Congress

Previous successes in blocking pathways to Asian carp include installing the Eagle Marsh berm near Ft. Wayne, Indiana in 2016, to close a connection between the Wabash and Maumee River systems during flooding, and closing the St. Anthony Falls Lock and Dam in Minnesota in 2015.

Methods, technologies and strategies for reducing Asian carp populations are advancing through federal and state collaborations and funded by federal appropriations and the Great Lakes Restoration Initiative.

This year, the Missouri Department of Conservation teamed up with the U.S. Fish and Wildlife Service and the U.S. Geological Survey to remove 47,000 Asian carp from a Missouri lake using the unified method.

Michigan hosted a $1 million “Carp Tank” to solicit innovative ideas to stopping Asian carp that could later be added to the Brandon Road plan, including a cavitation bubble barrier.

All of these methods require continued funding to stop Asian carp, wherever they are.

Strategies for removing Asian carp from these waters requires federal funding to assist strapped state fish and wildlife agencies struggling to restore their fisheries. We encourage our elected representatives from the Great Lakes region to support the federal funding requests for both removing Asian carp and preventing their spread to new waters in the Mississippi, Ohio, and Missouri River watersheds and everywhere else they’re found. 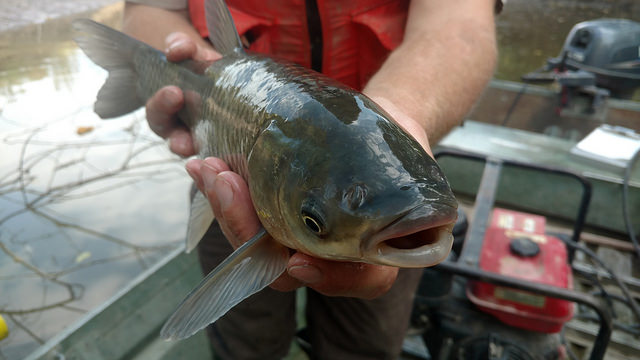 Silver carp can weigh up to 60 lbs and reach 3 feet in length. They will jump out of the water as high as 5 feet when disturbed by a boat motor, risking injury to recreational boaters and anglers.

Bighead carp can weigh up to 90 lbs and reach 5 feet in length. They consume up to 40% of their body weight daily, eating the food supply which native and sport fish species depend upon.

Black carp can weigh over 150 lbs and grow over 5 feet in length. They east snails, mussels and mollusks, posing a significant threat to many native – and some endangered – species of mussels in the waters they invade.

Grass carp can weigh over 80 lbs and top 5 feet in length. They can eat 20- 100% of their body weight daily in aquatic vegetation, impacting aquatic and wetland habitat for native species.

Invasive Species: Invasive species, specifically Asian carp, have long been serious threats to the health of our Great Lakes and inland waters. The GLCC will work to improve education on preventing invasive species and advocate for additional funding sources.  Specifically, we are strongly supportive of the Brandon Road Lock and Dam project that is aimed to help keep Asian carp out of the Great Lakes.  In addition, we are working to secure additional federal investments to help stop the further spread of invasive species and Asian carp in waters where they currently are impacting native fish and local economies.

Habitat: The Great Lakes Restoration Initiative (GLRI) is the marquee federal restoration program that accelerates efforts to protect and restore the largest system of fresh surface water in the world – the Great Lakes.  In addition, our Coalition strongly supports the Farm Bill. This is the largest federal legislation for conservation that Congress writes, that has the largest benefit for wetlands and waterfowl conservation.

The North American Wetlands Conservation Act (NAWCA) conserves North America’s waterfowl, fish and wildlife resources while producing a variety of environmental and economic benefits. This is a non-regulatory, incentive-based, voluntary wildlife conservation program.  NAWCA stimulate public-private partnerships to protect, restore, and manage wetland habitats for a diversity of migratory birds and other wildlife.

Hunter/Angler Access: Hunter and angler access remains a priority of each organization in the GLCC. Protecting public lands and the right to recreate on those lands is imperative to other priorities as well such as sportsmen and women’s heritage and R3 efforts. Public land in the Great Lakes region provides those opportunities and programs like the Land and Water Conservation Fund (LWCF) provide both public land, wildlife habitat, public water access, and outdoor recreation opportunities. While LWCF was permanently reauthorized in the 2019 John D. Dingell Conservation, Management and Recreation Act, it still lacks permanent dedicated full funding. The Great American Outdoors Act would ensure full, dedicated, permanent funding for LWCF as well as fix federal public land infrastructure.

Hunter/ Angler Recruitment and Retention:   Every year across the Great Lakes and the nation, the average number of hunters and anglers declines.  Efforts must be undertaken to recruit new hunters to our current ranks and to retain the ones we currently have. The GLCC appreciates the work of the state agencies in the region on recruiting new hunters and anglers and will continue to work with them to support these efforts.  In addition, we must help recruit new people from all walks of life into our sporting traditions.  Building a more diverse hunter angler population and better reflection of the demographics of our region are critical to the future of our outdoor heritage.

Funding for Fish and Wildlife: Recovering America’s Wildlife Act (RAWA): The Pittman-Robertson Act has helped recover game species by distributing excise taxes on firearms and hunting equipment to state wildlife agencies for conservation. The status of up to 1/3 of North American wildlife species – listed by states as species of greatest conservation need – is perilous or in decline. RAWA would provide state wildlife agencies additional funding to implement state wildlife action plans to recover these species and keep them off the endangered species list, where much more expensive and severe measures would be needed to prevent extinction.