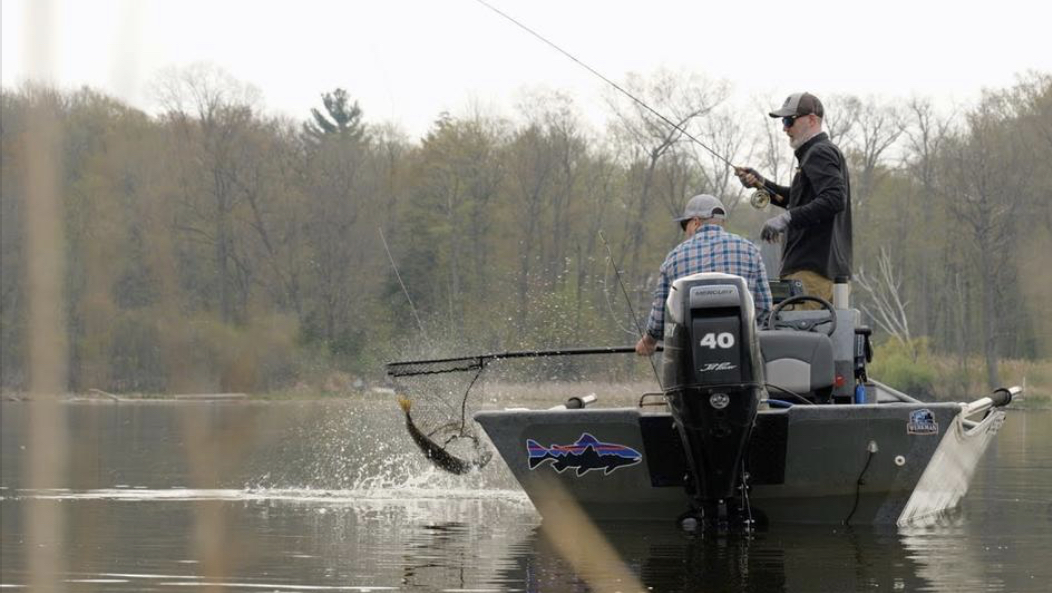 On one set of starting blocks, picture the mass of invasive carp occupying the Mississippi River system and its tributaries, moving ever North in search of the food resources necessary to sustain them. On another set of starting blocks, picture the combined state and federal agencies, conservation organizations, and commercial anglers working to invent, fund, and install barriers to slow the invasive carp march northward.

The finish line is the Great Lakes — connected to the Mississippi River tributaries through the Chicago Area Waterway System — where scientific studies have modeled their likely adverse impacts on the native and sport fish which comprise a $10 billion annual recreational fishery.  Every few years an invasive carp approaches close as if just to remind us that existing defenses alone are not enough.

It is in the midst of this race against time that we dropped in two years ago to film Against the Current, a film documenting the national effort to stop invasive carp from the scientific, tribal, recreational, and tourism perspectives from northern Michigan to Indiana, Illinois, and down to Tennessee. Much has occurred in those two years since.  So we dropped back in for a sequel to catch up with a couple people from the first film, and some new perspectives, to focus on the aquatic diversity of the fisheries at risk in Michigan from invasive carp.

Against the Current 2: Keeping Invasive Carp Out of the Great Lakes debuted on Michigan Out-of-Doors TV on September 8, 2022, to more than 100,000 Michigan households through their local PBS stations. You can watch it here on Vimeo or below:

We started off in Spring Lake – near Grand Haven, Michigan – with Tom Werkman, owner and guide with Werkman Outfitters, and a member of the Great Lakes Business Network. Tom was featured in Against the Current on the Grand River. Tom was the ideal person to interview about the potential impact of invasive carp on the Great Lakes because his business relies on both the aquatic diversity of the Grand River and its connected fisheries and his knowledge of it. We chose Spring Lake because it is both a popular and productive fishery – it has even hosted bass tournaments – and it is closely connected to Lake Michigan through the Grand River.

A 2017 modeling study conducted by the United States Geological Survey (USGS) found that the nearshore areas (within one mile) of the Lake Michigan coastline, its bays, drowned river mouths, and its connected waters (like the Grand River and Spring Lake) would have sufficient food resources to sustain invasive carp if they were to establish a population in Lake Michigan. Since aquatic diversity is often the most apparent casualty of invasive carp when they take over new habitat, highlighting Michigan’s aquatic diversity was our primary goal.

And what better way to highlight the aquatic diversity of a freshwater ecosystem with a fishing guide than by trying to catch as many different species of fish as we could? Tom and I fished Spring Lake with fly rods from his drift boat while Jordan Browne – the film’s producer – filmed and directed us to ensure we captured all the shots.

Tom kicked off the action by catching a beautiful northern pike and, shortly after, a small bluegill. I caught a largemouth bass on a fly and then Tom caught several before we called it a day. Between us, we caught the three most popular species of sport fish on the lake, and a very representative mix for most warmwater inland lakes in Michigan, whether fishing with flies, lures, or bait:  largemouth bass, bluegill, and northern pike.

“We’re in the most productive waters – from a biodiversity standpoint – in the Grand River system,” Tom said. “If we were to get invasive carp into Lake Michigan, and then into the Grand River system, it would devastate the recreational fishery around here. I’m a fishing guide, I make my living off of the fishery, and it is important that these fisheries maintain their health.”

Spring Lake, located in the middle of a populated area and still able to sustain such a robust fishery, is a prime example of what sustains Michigan’s recreational sport-fishing economy, valued at $2.3 billion annually, according to a study commissioned by Michigan United Conservation Clubs.

“That’s not just purchasing licenses, that’s 1.1 million anglers buying tackle, bait, gear, boats, and hotel nights all around the state,” explains Amy Trotter, executive director of Michigan United Conservation Clubs. “That economic impact is truly an asset to our state and it’s also what is most at risk with the threat of invasive carp.”

It’s not just the economy of Michigan’s recreational fishery that’s at stake, either: it’s the freshwater way of life and culture that defines our state.

“Michigan is home to some of the world’s most iconic and diverse sport-fishing opportunities, so if invasive carp invade the Great Lakes system, what we’re going to find are threats in primarily two categories,” said Dan Eichinger, director of the Michigan Department of Natural Resources. “One is they’re going to compete with native fish species – native sport fish species – for food sources and they’re also going to significantly disrupt habitat that’s critical for all the life cycles of our sport fish.”

To learn more about the science that predicts what those impacts would be, we joined Ali Shakoor on Lake Erie. Ali is a scientist with the Department of Biological Science at Wayne State University and the National Oceanic and Atmospheric Administration (NOAA), and a professional walleye angler and charter fishing captain. He co-authored a 2021 study that modeled the potential food web impacts of invasive carp on the Great Lakes.  Ali also was featured in Against the Current.

“You have that nearshore, littoral, riparian zone (in Lake Michigan) that is going to be shallower, warmer, more productive and I believe to be a perfect avenue for them to get in,” Ali said as we trolled jerkbaits below planning boards for walleye and as many other species of fish as we could catch on Lake Erie that morning.

“Lake Erie is unfortunately great habitat for invasive carp. Planktivores could be outcompeted by invasive carp, so here in Lake Erie you’re talking about gizzard shad, one of the primary forage for walleye,” Ali said as he reeled in a nice 20-inch walleye.

“In Lake Michigan and Lake Huron, we talk about the primary forage fish being alewives and bloaters, again prey species for chinook salmon and lake trout and other fish. So even though there’s not a direct competition with those fish, you’re still going to have food web impacts that will eventually impact different life stages for those fish.”

Lake Erie is also very productive for native sport fish species, so we did our best to catch all of them. Between us we landed several walleye, as well as white perch, freshwater drum, and white bass.

“A lot of people like to come out and eat them,” Ali said, holding the white bass. “There’s a huge fishery for these on the (Detroit) River. You go up there right now and most of the people are fishing for white bass. People in the City of Detroit will load up on these this time of year, so if these fish were to become scarce, or harder to catch as a result of food web interactions, this could actually affect the survival of people who depend on these fish.”

With these threats to Michigan’s fishery – economic, subsistence, and recreational – what is being done to stop them from getting into the Great Lakes?

“Michigan has been very involved in working with the Army Corps of Engineers, the State of Illinois, the United States Congress and our partner states from across the Great Lakes basin to try to get us to a point where we actually have a barrier that’s going to prevent carp from moving up from the State of Illinois and getting into the Great Lakes,” explained Eichinger.

Specifically, Michigan provided $8 million of the $10 million non-federal cost-share required to fund the pre-engineering and design phase of the Brandon Road Lock and Dam project.  This project will rebuild the existing lock and dam near Joliet, Illinois, to include a suite of smart technologies to prevent invasive carp from moving through the lock, and providing a chokepoint to stop the advance of invasive carp into the Chicago Area Waterway System and its multiple connections to Lake Michigan.

It can’t come soon enough: In August 2022, a silver carp was captured in Chicago’s Lake Calumet, just seven miles from Lake Michigan and on the wrong side of the existing electric barriers in the waterway system. In 2017, a silver carp was caught nine miles from Lake Michigan in the Little Calumet River, and a bighead carp was captured in Lake Calumet in 2010.  So, the stakes are high and urgency is needed to finalize the Brandon Road plan to protect the Great Lakes, our economy and our quality of life.

While it doesn’t mean that invasive carp have established a population base that close to Lake Michigan, it does provide further evidence that existing measures alone are not enough to keep invasive carp out of Lake Michigan and that a barrier like the Brandon Road Lock and Dam is needed. Even at an estimated cost of $830 million, the one-time construction cost is just a fraction of the $10 billion annual sport-fishery of the Great Lakes.

Even at an estimated cost of $830 million, the one-time construction cost is just a fraction of the $10 billion annual sport-fishery of the Great Lakes.

“The Great Lakes have a world-class fishery, from smallmouth and largemouth bass to trout, salmon, we have it all here, and invasive carp are a threat to this value that we have here in the Great Lakes,” said Marc Smith, policy director for the National Wildlife Federation. “We have a project now – the Brandon Road Lock and Dam – that has made tremendous progress in the past two years. Congress has stepped up and fully authorized the project; the State of Michigan, State of Illinois, and Army Corps of Engineers have come together on a design agreement that is currently underway to design this project.”

Congress has agreed to fund 80% of the Brandon Road project and language in the pending 2022 Water Resources Development Act proposes to adjust the cost share to fund 90%.

The Outlook for Michigan’s Fisheries

The silver carp caught in Lake Calumet reminds us that we cannot afford any delay in the design and construction of the Brandon Road project.  There is concern that further delay and interruption in funding for the project would keep the door open for carp to swim into Lake Michigan. We learned in Against the Current that wherever invasive carp have already established a population – like the Wabash River in Indiana or Kentucky Lake in Tennessee – the biodiversity of native fish species is in jeopardy.

We learned about the efforts of the Michigan DNR to work with other states and federal agencies to ensure that a barrier is built to keep invasive carp out of the Great Lakes, and that Congress has approved both the project and most of the funding.

The only question now is who will win that race? The invasive carp marching ever northward toward the Great Lakes, or the collective effort to keep them out? For the fish that we caught and released making this film, and the opportunity of every current and future angler to catch them, I hope – and I am confident – that we will stop them in time. 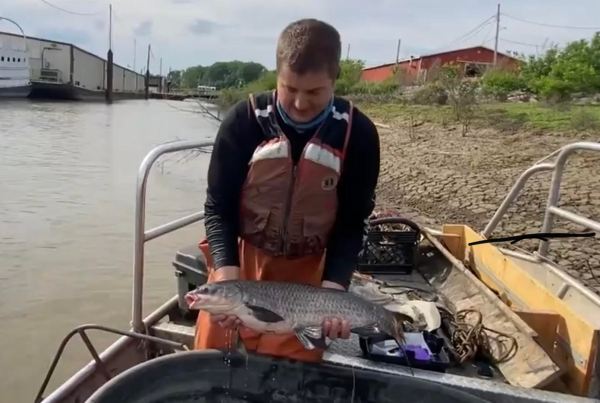