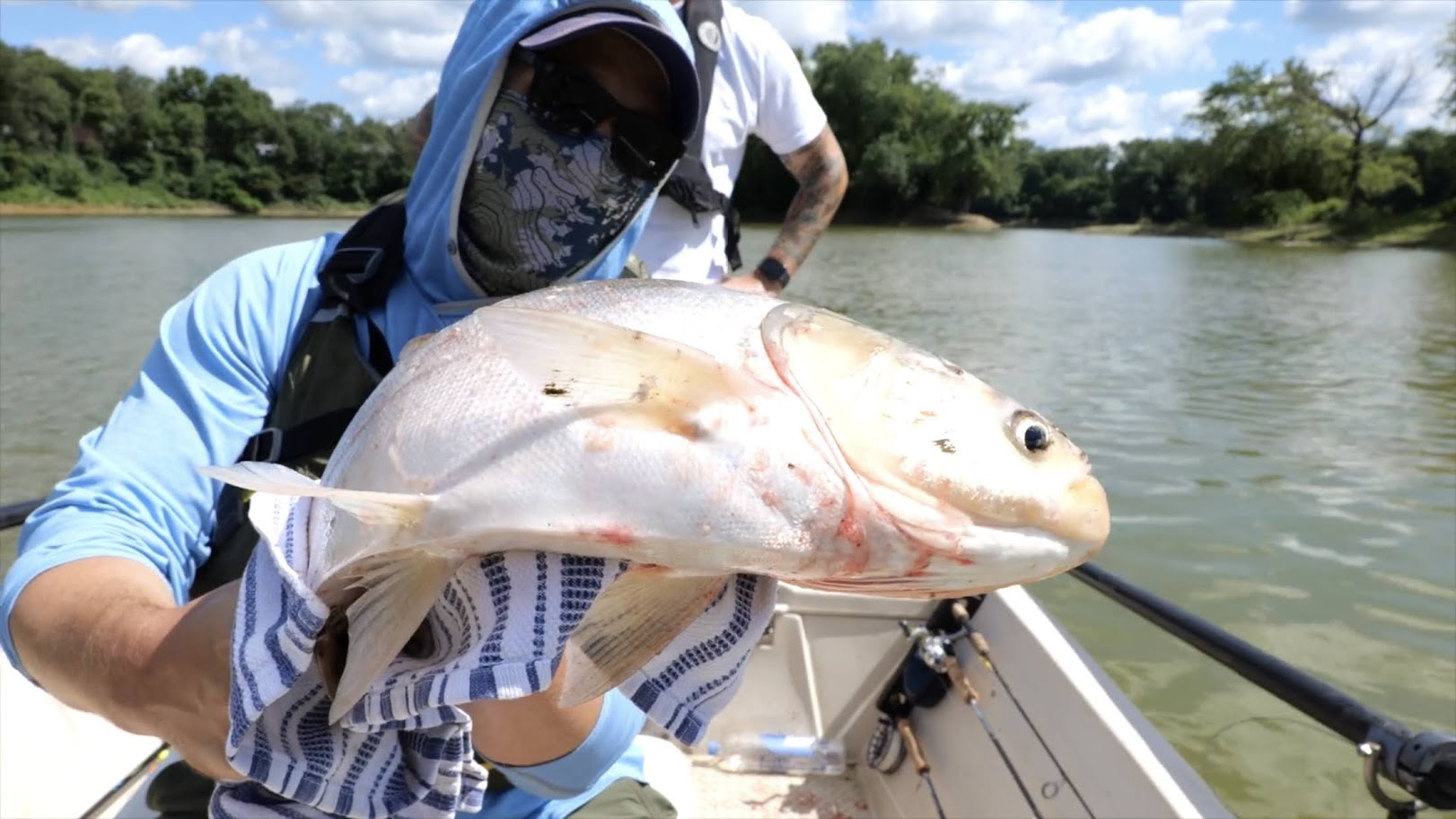 Football and the national effort to stop invasive carp have a lot in common. They have complicated playbooks, a lot of different players and teams executing those playbooks across the country, and it takes a lot of money and infrastructure to consistently win. But despite the complexity of the plans and playbooks, they also share similar bedrock fundamentals: blocking and tackling.

Invasive carp include bighead, silver, grass, and black carp. Originally imported mostly into Arkansas aquaculture facilities in the 1960’s and 1970’s to clean retention ponds, they escaped into wild water – especially during major flood events – and have been colonizing water bodies throughout the Mississippi River drainage ever since in a northward march toward the Great Lakes. As filter feeders, they consume plankton, algae, and other base-level food chain organisms. They grow large, fast, and out-compete native fish, greatly reducing aquatic biodiversity and starving out or pushing out the native and sport fish that anglers like to catch and freshwater economies are built upon.

In the 2020 National Wildlife Federation film Against the Current, Tennessee Wildlife Federation executive director Mike Butler explained the concept of “block and tackle” to eliminating invasive carp; build the barriers to block them from invading new waters and fund the tackling – the commercial fishing and agency-conducted removal – of invasive carp from existing waters. Applied nationally, that is the strategy that is ongoing. We’re continuing to make progress on the blocking them from the Great Lakes and funding the tackling removal efforts to reduce their numbers and impact in existing waters.

Blocking the Pathways to the Great Lakes

Almost a year ago, Congress authorized the U.S. Army Corps of Engineers (Corps) to rebuild the Brandon Road Lock and Dam near Joliet, Illinois, with multiple new technologies designed to block the advance of invasive carp toward Lake Michigan. It was the victory we’d been working towards for close to a decade to keep invasive carp out of the Great Lakes. Mission accomplished then, right? Far from it, actually: There is still much work to be done.

The Chicago Area Waterway System (CAWS) provides an artificial connection between the Mississippi River drainage and the Great Lakes basin via the Des Plaines and Illinois Rivers through a series of locks and dams. While a series of electric barriers exist on the waterway, invasive carp have been found on the Lake Michigan side of the electric barriers, most notably in 2017 when a silver carp was found just nine miles from Lake Michigan. The Brandon Road Interbasin Project will rebuild the Brandon Road Lock and Dam, located at a chokepoint before the CAWS branches out to multiple connections with Lake Michigan, to install an engineered channel fitted with electric barriers, bubble barriers, acoustic deterrents, and a flushing lock, as well as non-structural measures.

Since the beginning of 2021, the Brandon Road Interbasin Project team at the Corps has held several design charrettes, which are specialized meetings where structural and non-structural design and budget elements are worked out. They also held stakeholder meetings over the summer with shipping industry representatives and another with the Chicago Area Waterway System Aquatic Invasive Species Advisory Council. They’ve also been testing design elements at other locations that could be used in the Brandon Road Interbasin Project, including the installation of an acoustic deterrent at a lock on the Mississippi River.

Preventing invasive carp from entering the Great Lakes is not solely an Illinois burden to solve economically because the project is located in Illinois.  It is very clear that this is a project to protect multiple states in the Great Lakes basin from a problem that originated and spread through multiple states in the Mississippi River basin. As such, it should receive full federal funding because it is a truly national problem to solve.  There is precedent for full funding for similar projects like this. For example, the original electrical barrier project currently operating on the Illinois River just southwest of Chicago to help reduce the risk of invasive carp of transferring into Lake Michigan was and remains a full federal project – meaning all the funding for the construction, maintenance and operation is covered by the federal government.

While this operation is located in Illinois, the state was and remains the non-federal partner, but is not liable for any of the costs associated with the operation.  In addition, the recently Congressionally-authorized and appropriated expansion of the Soo Locks located in Sault Ste. Marie, Michigan was a full federal funding project. These locks are a vital transportation hub for commerce – not just for Michigan – but for the entire Great Lakes region, including Canada.  Michigan, as the non-federal partner, is not on the hook to cover the billions in cost for this project. And lastly, we need a full federal cost share for Brandon Road because we cannot afford any delay in commencing construction of the project once the preconstruction engineering and design phase is complete that could allow invasive carp the time to invade and establish a population in the Great Lakes.

At the same time, state and federal agencies continue the ongoing work of monitoring and removing invasive carp through geo-tagging, the modified unified method, and developing new technologies of invasive carp deterrents. The playbook for this work is the 2021 Asian Carp Action Plan, implemented by the Invasive Carp Regional Coordinating Committee, where multiple federal and state agencies work together like one cohesive team. Much of this work is funded through the Great Lakes Restoration Initiative (GLRI).

The Minnesota Department of Natural Resources, Wisconsin Department of Natural Resources, U.S. Geological Survey, and U.S. Fish and Wildlife Service have been collaborating on employing the Modified Unified Method of locating and removing invasive carp on the Mississippi River near LaCrosse, Wisconsin. And when sampling for invasive carp eDNA turned up hits in the Milwaukee River, the Wisconsin DNR and U.S. Fish and Wildlife Service conducted intensive follow-up monitoring efforts to determine if there were live invasive carp in the river, turning up none. These are two examples of plays in the playbook for ongoing non-structural invasive carp monitoring and removal actions by state and federal agencies.

While these projects play out in the Great Lakes region, much work is underway in the lower Mississippi River basin to reduce the numbers of invasive carp that impact southern waters and push north. In 2021, there have been continued strides made to block and tackle invasive carp in the Southeast.

Blocking and Tackling in the Mississippi River Basin

The Tennessee Valley Authority and the Corps issued a programmatic environmental assessment that prioritized barriers that would block the movement of invasive carp in the Tennessee River Basin. The result of this assessment recommended that a handful of best management technologies should be used at priority locations along the Tennessee River to help control  the movement of invasive carp.  This will greatly help and inform the decision-making process moving forward.

It has been nearly two years since the installation of the Bioacoustic Fish Fence on Lake Barkley Lock and Dam on the Cumberland River. The Kentucky Department of Fish and Wildlife Resources (KDFWR) provides on-site support with many facets of the project and the agency and others have been encouraged by preliminary data analysis of fish movements around the BAFF.

In Tennessee, commercial fishers are catching more than ever, with 900,000 lbs. of invasive carp caught in September of 2021. Harvest of invasive carp in the state of Kentucky has continued to increase with commercial fishers posting another record year in 2020 of 7.6 million pounds of fish harvested. As of August 2021, commercial fishers had harvested another 5.6 million pounds of invasive carp. Although these totals represent harvest statewide, approximately 90% of those fish were harvested from Kentucky Lake and Lake Barkley. On the Ohio River, KDOW’s program increased harvests along the invasion front in the middle Ohio River by more than 200% upon its implementation and we are beginning to establish target harvest goals for contracted fishermen and women that are intended to encourage harvest facilitation from processors.

Monitoring for invasive carp continues throughout the Tennessee  River Valley. The Alabama Division of Conservation and Natural Resources (ADCNR)’s invasive species program has established monitoring sites using boat electrofishing on Wheeler, Wilson, and Pickwick reservoirs in summer and fall.  To date, two (2) individual Silver Carp have been captured among these sites in Pickwick Lake only. Gillnet sites were also sampled in summer 2021 and eight individuals were captured in Pickwick Lake only.  Fall 2021 gillnet sampling will commence October 19. Spring-Fall 2022 will see resampling of all sites above with a fall addition of tailwater sampling at each dam (Wheeler, Wilson, Guntersville) in Alabama waters.  TWRA is sampling and teaming with ADCNR on dams downstream/upstream of Alabama waters. Telemetry at Guntersville Dam is ongoing, but current data reports (via Tennessee Tech University) do not appear to show passage of carp.

The Mississippi Department of Wildlife, Fisheries and Parks (MDWFP) is also monitoring for invasive carp and Mississippi State University personnel are preparing a final report of their two-year study tracking invasive carp in Pickwick and Bay Springs Lake and whether or not they are impacting sportfish in two Tennessee water bodies.

Tennessee Wildlife Federation and others are working with fish processors, fish brokers, UTIA Food Science, and local government economic development groups to grow and strengthen the human food market for invasive  carp. Prices of carp for human consumption are much more substantial and attractive to commercial fishermen and women and provide greater incentive for them to remove more of these fish from our waterways.

A National Blocking and Tackling Concept to Stop Invasive Carp

The problem of invasive carp is a national issue. They were imported into Arkansas by fish farmers and some even by the U.S. Fish and Wildlife Service before it was understood how damaging they would be if they escaped. They have made their way up the Mississippi River drainage through all the states along the way as far north as Minnesota and spread out into the Tennessee River and the Ohio River system into Tennessee, Kentucky, Ohio, Indiana, and through the Missouri River system as far as North Dakota. If they get into the Great Lakes, scientific studies model that they will be able to find enough food resources to spread throughout the Great Lakes, impacting shoreline communities and connected waters in Michigan, Wisconsin, Minnesota, Illinois, Indiana, Ohio, Pennsylvania, New York, and even Canada.

Funding needs to continue to tackle the invasive carp problem in the Mississippi River basin by funding agency removal programs, incentivizing commercial harvest, and expanding markets for invasive carp products. The plan to block invasive carp from the Great Lakes – the Brandon Road Interbasin Project – is marching down the field. Each stage of the project – the Army Corps of Engineers Chief’s Report to Congress, Congressional approval and funding of the projects – was like a first down. When the silver carp was found on the Lake Michigan side of existing electric barriers in 2017, it was like a penalty. We’re in the fourth quarter of the championship game to keep invasive carp out of the Great Lakes but we need a touchdown – the completed construction of the Brandon Road project – to win. If Congress doesn’t adjust its game plan and provide full federal funding, then we risk stalling out in the red zone when the preconstruction engineering and design phase is completed.

The stakes are much higher than a football game, though. The Great Lakes fisheries, their connected inland waters, and the economies, lifestyles, and livelihoods that rely upon them are at risk.

Tell Congress to provide full federal funding to keep invasive carp out of the Great Lakes! 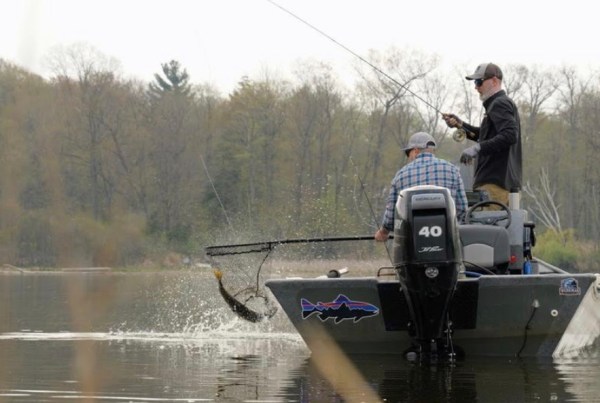