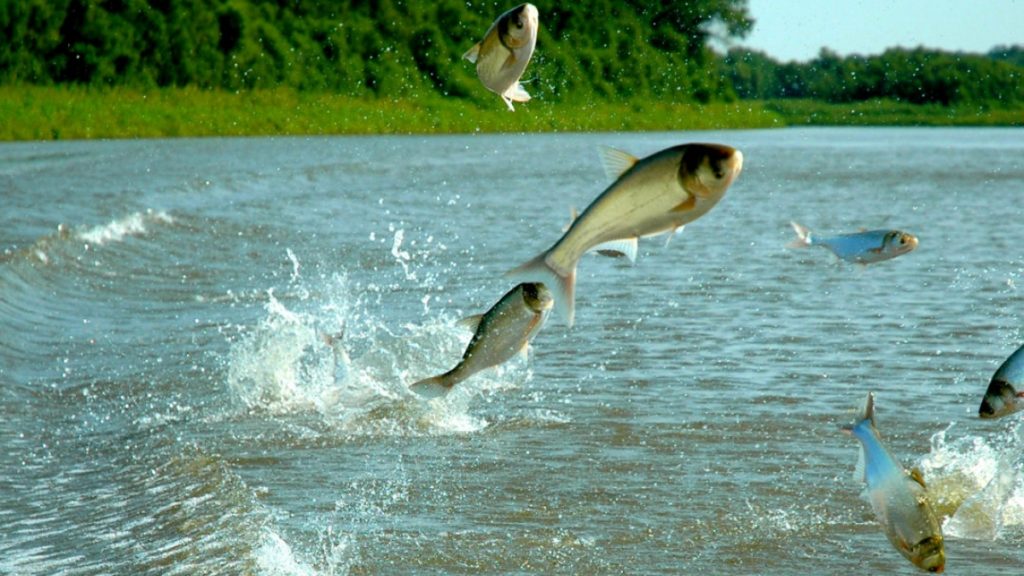 Gov. Whitmer signed into law a supplemental budget for the current fiscal year on Monday, but in the face of the necessary COVID-19 response spending, found it necessary to veto $80 million of General Fund money.

The cuts included a line-item veto of $8 million set aside to help prevent invasive Asian carp from spreading into our Great Lakes. The vetoes were done in consultation and concurrence with legislative leaders.

The $8 million, a part of Senate Bill 151 (SB 151) passed by Michigan legislators earlier this month, was marked for Illinois’ non-federal, cost-share portion of the preconstruction, engineering and design (PED) phase of the Brandon Road Lock and Dam project.

The projected revenue losses in the slowing economy coupled with massive amounts of money being reprioritized for COVID-19 response efforts are key factors in this decision, according to a press release from Gov. Whitmer’s office and sources close to state government.

In 2018, former-Gov. Rick Snyder and Michigan lawmakers sought to expedite the Brandon Road plan at a time when Illinois wasn’t able to get the funding appropriated by earmarking $8 million in the Michigan Infrastructure Fund for a future appropriation of the PED on behalf of Illinois.

The project, which would be constructed by the U.S. Army Corps of Engineers, would implement acoustic fish deterrents, an air bubble curtain, a flushing lock and an electrical dispersal barrier in an attempt to stop invasive Asian carp, particularly bighead and silver carp, from reaching the Great Lakes. The Brandon Road Lock and Dam, located in Joliet, IL, is the best choke point in the Chicago Area Waterway System to stop carp before reaching Lake Michigan. The PED is the first step towards beginning the project.

“MUCC has fought to keep invasive carp out of our Great Lakes for more than a decade, and it is a key priority for us,” said Amy Trotter, Michigan United Conservation Clubs (MUCC) executive director. “We will continue to seek out creative funding opportunities to move this project forward in the weeks and months ahead.”

The Great Lakes $7 billion sport fishing industry (Michigan equates to $2.3 billion of that) and $52 billion recreation industry is at risk if invasive Asian carp are able to enter Lake Michigan through the Chicago River. Cities across Michigan rely on the tourism that the Great Lakes and their connecting waterways provide through fishing, hunting, kayaking, canoeing, boating and other recreational endeavors. The Great Lakes support 1.5 million jobs and $65 billion in wages annually.

Marc Smith, policy director for the National Wildlife Federation (NWF), said we are living in unprecedented times, and we ultimately need to look to the federal government for answers and ways to solve the funding issues facing our freshwater systems.

“Given the urgent situation we are facing today, we understand the need to focus all attention and resources to fight this public health crisis,” Smith said. “The decision to remove $8 million from the supplemental to support efforts to help keep Asian carp out of our Great Lakes is unfortunate, but understandable.  Asian carp are a national problem that demands a national response. Now is the time for the federal government to step in and take on the full responsibility for the Brandon Road project.”

The governor’s veto was not a partisan issue, Trotter said.

“Legislative leaders from both sides of the aisle were forced into making tough decisions — decisions that spanned much more than carp,” Trotter said.

Also included in the governor’s veto was money intended for the Pure Michigan campaign ($16 million) and the Michigan Reconnect grant program ($35 million).

Taylor Ridderbusch, Great Lakes organizer for Trout Unlimited (TU), said this hiccup will not deter conservation organizations from continuing to seek a funding mechanism for this project.

“Every year we wait to fund this project, material and construction costs rise and labor prices increase,” Ridderbusch said. “The monetary asks become more and more difficult the longer we wait.”

During the Snyder era, a coalition called Block Asian Carp was formed. That coalition was disbanded after Snyder left office and has remained relatively inactive since.

Ridderbusch sees the challenges ahead, which include approval and appropriation of the project, as issues that could be the kick-starter for Block Asian Carp or a similar coalition to reform and reengage.

One of the major asks from conservation organizations throughout the region including Healing our Waters, NWF, MUCC, TU, marine manufacturers and the Alliance for the Great Lakes has been to secure federal funding for Illinois’ portion of the cost-share.

“The federal government covering local cost-shares of Army Corps’ projects isn’t unprecedented,” Ridderbusch said. “Given that this is a regional issue threatening multiple states, livelihoods of citizens and biological ecosystems, it is irresponsible to pin the cost on one state.”