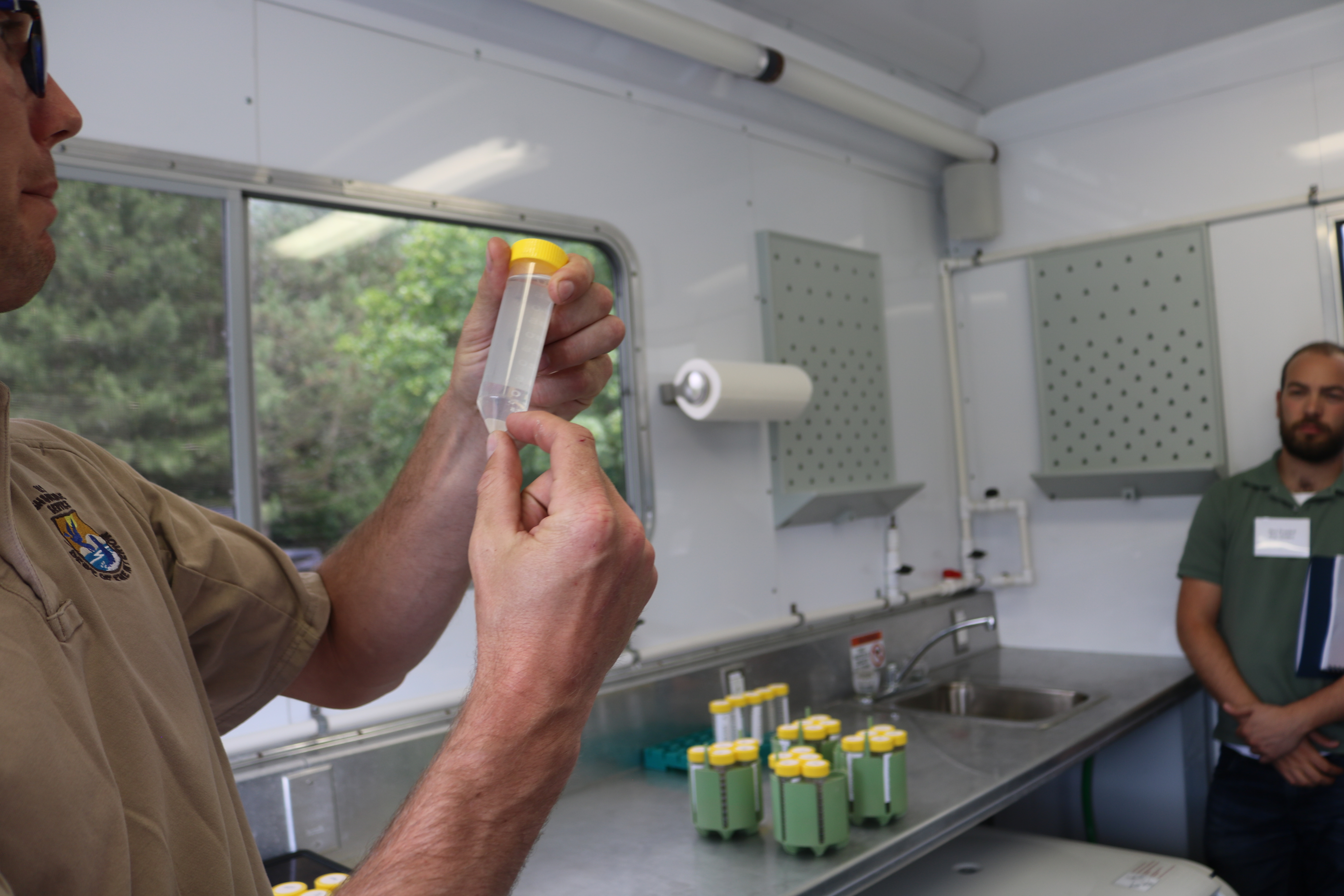 By Great Lakes Conservation Coalition May 23, 2019 No Comments

In April, the U.S. Fish and Wildlife Service found the environmental DNA (eDNA) of bighead and silver carp in Lake Calumet, just six miles from Lake Michigan. While subsequent fishing and sampling did not reveal any live Asian carp, these positive samples alarmed conservationists worried about an Asian carp invasion of the Great Lakes as they await the release of a final plan to Congress on how to keep them out.

Environmental DNA (eDNA) is like a forensic fingerprint of an organism. The presence of eDNA does not mean that the organism(s) – in this case invasive silver and bighead carp – were definitely in the water body that was sampled, but it means they could have been. Asian carp eDNA could also be transported by boats or other vectors. That’s why the U.S. Fish and Wildlife Service and coordinated agencies follow up positive eDNA results with intensive fishing to try to determine if there are actual Asian carp in the water. And this time, they didn’t find any.

Still, the presence of three positive samples – each – for bighead and silver carp is just the latest evidence that the existing barriers for preventing an Asian carp invasion of the Great Lakes are not enough.

Asian carp are an invasive species which have disrupted fisheries throughout the South and Midwest and now threaten the Great Lakes. Asian carp include bighead, silver, black and grass carp. Bighead and silver carp have damaged fisheries from Kentucky Lake to the Illinois River by hoarding food resources and outcompeting native sport fish. With rapid reproduction, voracious appetites, and a lack of predators in American waters, they hoard plankton – the base of the aquatic food chain – which starves out baitfish and the native and sport fish they support up the food chain.

The main body of their population front is approximately 50 miles from Lake Michigan in the Illinois and Des Plaines River. The U.S. Army Corps of Engineers (Corps) has a plan to add additional defenses at the Brandon Road Lock and Dam at a chokepoint on the Illinois River about 37 miles south of Chicago. The plan includes adding an electric barrier, a water bubble barrier, an underwater acoustic sound barrier, and a flushing lock into an engineered channel which can be adapted to new fish deterrent technologies as they’re developed. Illinois Gov. J.B. Pritzker recently announced that Illinois would serve as the required non-federal sponsor for the project, and the next step is for the Corps to submit the final chief’s report to Congress for approval and funding.

“The recent finding of Asian carp evidence above the existing barriers just a few miles from Lake Michigan is deeply alarming,” said Marc Smith, director of conservation partnerships for the National Wildlife Federation. “This is yet another code red signal that undermines the need to act with swift urgency and approve the Brandon Road Lock plan to help close the door to the continued northward advance of Asian carp towards our Great Lakes. For the fish and wildlife, outdoor economy, and way of life for communities throughout the Great Lakes Basin, the plan to stop Asian carp cannot be delayed any longer.”

This was the second sampling effort in a row in which the U.S. Fish and Wildlife Service detected positive eDNA for Asian carp. In December, they posted results from October, 2018, which turned up three positive samples for silver carp and one for bighead carp in the Chicago Sanitary Ship Canal. Again, subsequent fishing efforts failed to turn up any live silver or bighead carp.

Environmental DNA detection methods were developed at the University of Notre Dame by Dr. David Lodge and put in use in 2009. It was this new method which picked up the first positive indications of Asian carp on the Lake Michigan side of a series of existing electric barriers in the Chicago Area Waterway System. This fueled lawsuits from Great Lakes state attempting to shut down the locks even before a live bighead carp was caught in Lake Calumet in 2010, as well as new laws banning the import of Asian carp into the United States. In June 2017, a live silver carp was caught in the Lockport pool just nine miles from Lake Michigan.

No Asian carp have been found in Lake Michigan – yet – but the Brandon Road project could take more than five years to complete – after Congress approves it. The Asian Carp Regional Coordinating Committee – a coalition of state and federal agencies working to stop Asian carp – conducts the monitoring and response activities which attempt to keep Asian carp out of the Great Lakes in the meantime, but as they continue to uncover evidence of the ability of bighead and silver carp to make it past the existing barrier to within just a few miles of Lake Michigan, the communities which rely on the Great Lakes are left to wonder if it will be too late to save their economy, ecology, and way of life.

“I don’t believe the average person who vacations in northern Michigan understands the devastating impact Asian carp would have on our communities,” said Brian Kozminski, owner of the True North Trout guide service in Boyne City, Michigan, and a member of the Great Lakes Business Network. “Gorgeous beaches, sailboats, water skiing: Lake Charlevoix tourism would come to an end for fear that someone might be hit by a projectile missile in the form of an Asian carp -90 pounds of solid fish.

“The charter boat and fishing industry would be impacted greatly by loss of forage fish if Asian carp were to get into our lakes and rivers,” Kozminski said.  “Fly fishing some of our beautiful rivers would have few species left after Asian carp. Once established in some of our larger systems like the Grand, the Muskegon, the Pere Marquette, it would be impossible to eradicate an invasive species like the Asian carp.”