(Originally published on the National Wildlife Federation blog on June 22, 2018)

The planer board bobbed on the gently rolling waves, then jerked sideways as its flag dipped in the blue water. Fish on! I reeled steady and slow and the walleye made its first appearance on the surface twenty feet behind the planer board. Pausing briefly to let a fishing partner remove the planer board, I continued reeling until our other fishing partner netted the walleye. Easily a keeper, it stretched out 20 inches on the measuring board and joined some friends in the boat’s live well.

Mike Avery — radio host of Mike Avery’s Outdoor Magazine — took veteran Michigan outdoor writer Tom Lounsbury and I out trolling for walleye on Saginaw Bay last Friday in his new Angler Qwest tri-toon, which is a pontoon boat with three pontoons. Tom and I were in town for the Michigan Outdoor Writers Association’s summer conference in Bay City, and Mike wanted to show me Saginaw Bay’s vibrant walleye fishery, which I’d never fished before. After a day on these waters, I knew more than ever why it was so vital that we stop Asian carp from getting into the Great Lakes more than 300 miles away near Chicago.

It wasn’t just the fun we had in the afternoon with fast action reeling in walleye, freshwater drum (also called “sheephead”), white bass and one northern pike. It was also seeing everything from large charter fishing boats to lone anglers in aluminum crafts out there among us, enjoying the beautiful afternoon on the water and catching one of the tastiest fish in North America — walleye.

At the same time, we saw tournament anglers who were competing in the Cabela’s National Walleye Tour, which drew 200 professional anglers to Bay City. The economic infusion into the region the walleye fishery provides doesn’t stop at the lodging, food and gas associated with any large event, or the fishing licenses that fund the Michigan Department of Natural Resources fish and wildlife divisions.

Much of the equipment we used is manufactured in Michigan. Mike’s Angler Qwest tri-toon is made in St Louis, Michigan by Apex Marine. The planer boards which indicated when a fish struck are made by Off Shore Tackle in Port Austin, Michigan, at the tip of the thumb. The Lure Lipstick Mike applied to the lures is made in Ortonville, Michigan, and much of Mike’s equipment was purchased at Jay’s Sporting Goods in Clare and Gaylord. These companies are all part of Michigan’s $26.6 billion outdoor recreation industry and the Great Lakes’ $7 billion sport-fishery.

Saginaw Bay, while a long way from Chicago, would likely provide prime habitat for Asian carp, which the United States Geological Survey predicted would congregate along the Great Lakes shorelines, bays, river mouths and inlets, where they would have sufficient phytoplankton to thrive, according to a 2017 study. It is one of the locations where the U.S. Fish and Wildlife Service tests for early detection of Asian carp eDNA (environmental DNA) which can indicate the possible presence of Asian carp if positive. To date, thankfully, no samples in the Saginaw Bay region have been positive.

If they get into Lake Michigan, though, there is nothing stopping Asian carp from spreading around the Great Lakes, including Saginaw Bay. In recent years, pathways have been closed in Indiana (Eagle Marsh Berm) and Minnesota (St. Anthony Falls Lock and Dam), but there are currently no stronger structural defenses against Asian carp near Chicago than when a silver carp was found on the wrong side of existing electrical barriers last summer, or when a bighead carp was found on the wrong side in 2010. A new electric barrier is under construction, but as we’ve seen, electric barriers alone are not enough to keep Asian carp out of the Great Lakes.

The Army Corps of Engineers released a draft plan last summer to strengthen defenses at the Brandon Road Lock and Dam, near Joliet, Illinois, which would include a multi-layered system including an engineered channel, electric barrier, water jets, acoustic sound deterrents and a flushing lock. A final plan is expected in 2019, and construction would be complete by 2025 with no delay in Congressional approval and funding. At approximately $275 million to build, this is a bargain when compared to the economic activity that would be lost if silver and bighead carp get into the Great Lakes. The National Wildlife Federation supports this plan, part of a coalition of 50 sportsmen’s groups which submitted a comment letter to the Corps in December 2017.

Working on this issue on a daily basis, it’s easy to get bogged down in the administrative process, the draft plans, the action plans, the final plans, the comment periods, the economic estimates, the food availability studies. That’s all the “what.” Every now and then, it’s good to get out on the water with a couple friends, set some lines, tell some stories, watch for the flag to go down on that Off Shore Tackle planing board, and catch a fish to be reminded of the “why.”

Stopping Asian carp isn’t about Asian carp. It’s about everything we have to lose if they get into the Great Lakes: the walleye, pike and bass; the boating, the vacation rentals, the equipment manufacturing. This summer, make sure you enjoy what we have to lose. Take a boat ride, catch a fish. And when you get back to shore, call your member of Congress and tell them to support the Brandon Road plan and “Stop Asian Carp.”

You can help the National Wildlife Federation’s efforts to stop Asian carp with the purchase of Great Lakes, Michigan, Ohio or Indiana themed apparel from Rep Your Water. 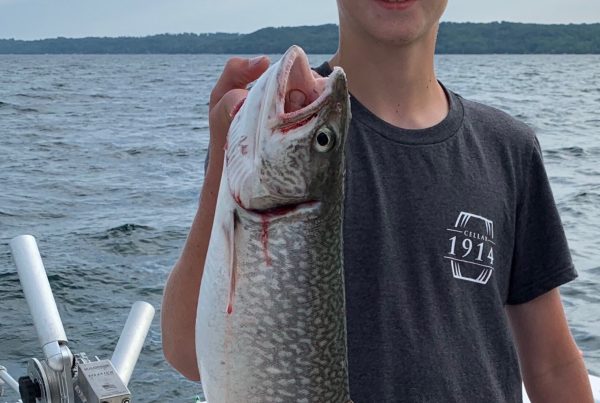